Artificial Intelligence - The Singularity Is Here And It Is Not Intelligent

Last Thursday the journal Science published an article by four MIT-affiliated data scientists (Sandy Pentland is in the group, and he’s a big name in these circles), titled “Unique in the shopping mall: On the reidentifiability of credit card metadata”. Sounds innocuous enough, but here’s the summary from the front page WSJ article describing the findings: Researchers at the Massachusetts Institute of Technology, writing Thursday in the journal Science, analyzed anonymous credit-card transactions by 1.1 million people. Using a new analytic formula, they needed only four bits of secondary information—metadata such as location or timing—to identify the unique individual purchasing patterns of 90% of the people involved, even when the data were scrubbed of any names, account numbers or other obvious identifiers. Still not sure what this means? It means that I don’t need your name and address, much less your social security number, to know who you ARE. With a trivial amount of transactional data I can figure out where you live, what you do, who you associate with, what you buy and what you sell. I don’t need to steal this data, and frankly I wouldn’t know what to do with your social security number even if I had it … it would just slow down my analysis. No, you give me everything I need just by living your very convenient life, where you’ve volunteered every bit of transactional information in the fine print of all of these wondrous services you’ve signed up for. And if there’s a bit more information I need – say, a device that records and transmits your driving habits – well, you’re only too happy to sell that to me for a few dollars off your insurance policy. After all, you’ve got nothing to hide. It’s free money! Almost every investor I know believes that the tools of surveillance and Big Data are only used against the marginalized Other – terrorist “sympathizers” in Yemen, gang “associates” in Compton – but not us. Oh no, not us. And if those tools are trained on us, it’s only to promote “transparency” and weed out the bad guys lurking in our midst. Or maybe to suggest a movie we’d like to watch. What could possibly be wrong with that? I’ve written a lot (here, here, and here) about what’s wrong with that, about how the modern fetish with transparency, aided and abetted by technology and government, perverts the core small-l liberal institutions of markets and representative government. It’s not that we’re complacent about our personal information. On the contrary, we are obsessed about the personal “keys” that are meaningful to humans – names, social security numbers, passwords and the like – and we spend billions of dollars and millions of hours every year to control those keys, to prevent them from falling into the wrong hands of other humans. But we willingly hand over a different set of keys to non-human hands without a second thought.

Computer Cops Will Arrest You Before You Commit A Crime 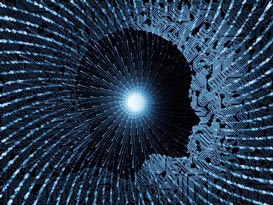 Innocent until proved guilty has always been a basic principle of British and before the Union, English and Scottish justice. Since late in the ninth century when King Alfred signed into law the Liber Judicialis, the nearest thing England and Great britain has ever had to a written constitution or, until recently ever needed, the presumption of innocence has stood.

Thinking of committing a crime cannot be a punishable offence, Philip K. Dick foresaw a world in which computers would predict who was going to commit crimes so that a preventative arrest could be made, but only in George Orwell's dystopian novel "1984" has Thought Crime ever been a punishable offence.

Until now. Some people, those who are quick to yell "conspiracy theorist" when I or other dissidents refer to "the scientific dictatorship" or the "New World Order" (though we are only quoting the words of people with names like Rothschild, Rockefeller, Churchill, Bush, Kennedy, Kofi Annan, Giscard d'Estang, Henry Kissinger, Eisenhower, Clinton, Blair, Brown, Delors ... in fact read a compilation for yourselves ofNew World Order quotes.

Some warn against this new world order, this subsumation of democracy and individual freedom under a blanket of conformity demanded by scientists who promise by maiking us all into humandroids they can create an ordered, scientific society like the one depicted in Aldous Huxley's Brave New World.

What is realy scary about the people leading this line of though is they have no intention of asking is if we are willing to become Slaves of the Machines, these left wing Nazi fellow travellers plan to impose it on us because they think we are too thick to understand that what is best for them (the elite) is good for we, the punters, who were born for servitude. How quaint that all their wailing and gnashing of teeth, all their ersatz campassions should mask attitudes so similar to that of Medieval Aristocrats.

Take a look at this and understand the nightmare these oligarchic collectivist shits have planned for you:


With revelations that the National Security Agency has collected some 20 trillion phone calls and emails via an expansive nationwide surveillance network, most Americans have already come to the realization that everything they do is being monitored.

But many shrug off Big Brother's prying eyes by suggesting that, since they aren't doing anything wrong, they have nothing to worry about.

That may have been true several years ago, but the digital surveillance systems of today are far more advanced than most people understand. No longer are these machines simply recording the data and storing them in some historical archive to be pulled at a later date should the government ever have reason to take a closer look at your personal life.' Continue reading

So it now goes beyond looking for keywords in emails, people saying things like "I effing hate Manchester United, I'd like to blow up Old Trafford," they are actively monitoring behaviour. Here's a little quote from deeper in the document (I know most of you are not going to read it all)


The algorithms being used don't just look for obvious keyword phrases associated with criminal activity like "I'm going to kill you” or "meet me later and we'll give him a beat down,” but focus in on routine activities, geo-location, and aggregate historical information to calculate the chance of a particular individual being involved in a crime at some point in the future.

Researchers at the University of Virginia demonstrated tweets could predict certain kinds of crimes if the correct analysis is applied.

A research paper published in the scientific journal Decision Support Systems last month said the analysis of geo-tagged tweets can be useful in predicting 19 to 25 kinds of crimes, especially for offenses such as stalking, thefts and certain kinds of assault.

The results are surprising, especially when one considers that people rarely tweet about crimes directly, said lead researcher Matthew Gerber of the university's Predictive Technology Lab.

Gerber said even tweets that have no direct link to crimes may contain information about activities often associated with them.

This is happening in the USA now but we know that British and UK mainstream political leaders are eager to follow down the same route. We have a chance to let them know what we think of their caring, sharing, minority loving Naziism in a few weeks. You know what to do. And if you need an extra nudge, watch this video:

RELATED POSTS:
Back to Contents table

The Full Orwell - UK Government Comes Over All Big Brother In a stealthy, or to be more accurate, creepy move that bypasses the democratic process the British government, without debate in our elected assembly, without media coverage and without the authority of law, the UK Government has usurped to itself the power to take biometric data from all of us and store it in ...
Surveillance leading to totalitarian state
RFID tattoos for total personal surveillance Google Plans More Evil Technology

Human DNA Shock: David Icke Was Right all The Time.
Britain’s maths policy simply doesn’t add up - but neither does overestimating the importance of maths.
The First humans From Australia Not Africa?
How We Create Reality - Part 1
Transhumanism: The Elite Total Control Agenda
A Unified Theory of Evolution – How Karma & Reincarnation Complete Darwinism & Intelligent Design - Weird science