Oxford professor has said Sir John Bell said critical comments from leaders, scientists and politicians who expressed critical views of the AstraZeneca Covid vaccine “probably killed hundreds of thousands of people”. It is a ridiculous comment of course, but typical of what we have come to expect from vaccine authoritarianism propagandists

Professor Bell complained that influential figures including French president Emmanuel Macron, had “damaged the reputation of the jab” around the world, resulting in less people accessing the life-saving vaccine.

Bell was speaking in a BBC documentary "AstraZeneca: A Vaccine for the World?," which will be broadcast on Tuesday 8th February at 9pm, said: “I think bad behaviour from scientists and politicians has probably killed hundreds of thousands of people – and that they cannot be proud of.”

In other words Professor Bell, who according to an article in the British Medical Journal has financial and professional links with Astra Zeneca believes anyone who does not agree with him should not be alowed to comment on this issue. So the carping of this science whore can be dismissed as just another case of 'He would say that, wouldn't he?'

In 2021 France'sMacron claimed that the vaccine “doesn’t work as expected” and appeared to be “quasi-ineffective” in the over-65s.

Hours before the European Medicines Agency (EMA) approved the AstraZeneca jab for use in the bloc, Macron slammed the AZ jab and criticised the UK’s decision to administer vaccine doses 12 weeks apart, claiming it could “accelerate the mutations” of the virus.

Other EU countries, including Germany, Spain and Italy, also temporarily suspended use of the AstraZeneca jab last year when it was linked to a risk of blood clots. In response to that evidence the science whores (i.e. those who get funding from corporations and organisations with financial or political interests in mass vaccination campaigns,) closed ranks around the vacine, dismissing the risk as not statistically significant. Independent research tells a different story however. 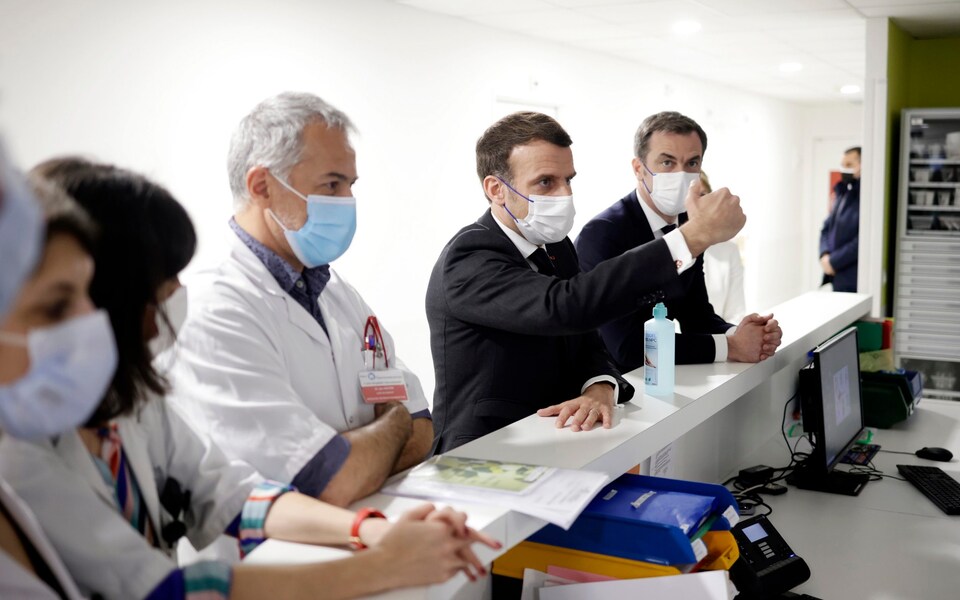 In all such discussions on COVID and the vaccines which were hyped as The Messiah that would save humanity from certain extinction it should be remembered that the vast majority of people who died in the pandemic and whose deaths could be linked to covid were over the age of 80 and / or had pre - existing long term health conditions. We should also remember that in the past any new drug or vaccine would be withdrawn on safety grounds if just 50 deaths worldwide could be linked to it (not conclusively PROVED to be cause by the vaccine, but merely a possible link suspected.) To date more that 1000 times that number of deaths have occurred that could possibly be linked to the vaccines.

The truth about the COVID scare mass vaccination scam is thus:
Scientifically illiterate Politicians, with their hidden agendas, advocated a mass gene therapy trail, with neither informed consent, nor proper Parliamentary scrutiny, resulting in hundreds of thousands of vaccine injuries and thousands of deaths.

In October 2020, Kate Bingham expressed the scientific consensus when she said: "Less than half the UK population can expect to be vaccinated against coronavirus... vaccinating everyone in the country is not going to happen, we just need to vaccinate everyone at risk.”

Two months later - after psychopathic genius in a Big Pharma corporate merketing department invented the killer marketing line: "No-one's safe until everyone's safe" - that objective changed to vaccinating everyone over the age of five three or more times. And now the billionaire psychopaths of the Big Pharma cartel who earn their $£€1,000,000 plus bonuses according to how many drugs they sell rather than how many lives they preserve are pushing idiots like 'Dementia Joe' Biden, BoJo The Clown Johnson, Granny - molester Macron and the invisible kraut who is supposedly in chage of Germany for babies to be given the untesed, experimental clotshots within a few days of birth. Corrupt does not being to describle they way these people operate.

None of the vaccines are approved, they were rushed through development and skiiped most of the usual testing porogram, being made available by their governments granting temporary approvak for emergency use only. Governments and the World Health Organisation (WHO) granted immunity from prosecution for any harm their vaccines might cause. This alone should have been enough to warn 90% of people to stay away from the vaccines but so intense was the propaganda campaign and so extreme were the threats and coercive measures used to pressure sceptics that about two thirds of the populations in developed nations accepted vaccination regardless of the possible long and short term consequences.

Temporary authorisation is not the same thing as approval. A trained first - aider might be given temporary authorisation to perform an emergency tracheotomy with a penknife and a drinking straw on someone choking in a restaurant, but it would not qualify that person as a surgeon. And temporary approval was given for two doses of vaccine. Once it bacame clear that the very limited immuity provided by the vaccines wears off after a few weeks, the manufacturers and health authorities began to push for mandatory booster shorts every few months.

We should take all this into account when being coerced by our governments and maindstream media into being part of what is effectively a clinical trial for Pfizer, AZ et al. None of these companies will be accountable for any harm that might arise.

And we should also question why there has been such a panic about this not - very - deadly disease. It is claimed COVID has been responsible for hundreds of thousands dead in nations of over 50 million such as UK, France, Italy? So have Cancer, Obesity, Type 2 Diabetes, Smoking, Seasonal Influenza, and yet we do liitle about it. We don't pour millions, if not billions of pounds into these developing vaccines that do not immunise against such killers or lockdown entire nations doing irreparirable damage to economies and social structures. We do not order people to stay in their homes, refrain from socialising, abandon sick and elderly relatives to the tender mercies of hospitals or care homes, keep children away from their lessons and their friends. The scientific case for the inefective responses to this hoax pandemic is completely unsubstantiated drivel just as the mainstream reporting of the pandemic has been.

The lesson to be learned from all this is politicians and their hand-picked scientific advisors, vested interests and unaccountable bureaucratic groups should not be in total control of the critically independent institution of scientific endeavour -- medical, environmental or technological.

It is too easy for them to prevent public understanding of lack of certainty, exclude evidence contradicting the narrative from the public domain, de-fund research grants for projects not supporting the political agendas of the ruling elites and basically to use propaganda to sugggest something is proven when it is not, especially if that something has support from computer models.

Beginning with Neil (Professor Pantsdown) Ferguson's '550,000 dead in the first wave' computer modelling of disaster, our lockdowns have been driven by an exaggeration of what might happen rather than observing and reacting to what was happening. The Johns Hopkins research sadly lays this out clearly and all its awful effects.

Infinitely more permanently harmful to our society is the global warming emergency which exists nowhere but on computer models, which has led governments in The UK, USA and main European nations to destroy working energy systems in the name of saving the plant and trapped us in a dangerous spiral of decline while Russia ramps up the proices of its oil and gas on which Europe is now dependent, while China, where there are few concerns about polluting the environment eargerly provides the manufacturing capacity that traditional manufacturing nations have made unviable because of regulations and 'green' taxes.

The UK governments' behavoural science police ir 'nudge unit' set up in 2010 to influence public attitudes on things like immigration and climate change has been working overtime during the COVID pandemic but have their methods of trying to scare people into complying with policy been acceptable in a democratic nation?

The Betrayal Of Humanity By The Corrupt Medical Professions
From day one, back in March 2020 when the pandemic was declared, this blog has been questioning the fake statistics, highlighting the distortion of statistics to serve the scaremongering narratives of the elites and exposing the lies and dishonesty of politicians, sciencetitis (sic) and, surprisingly perhaps if you are of a credulous nature, doctors and the medical professions. ... Continue reading >>>

In A Fit Of Honesty Italian Institute Of Health Reduces Official COVID Death Toll By 97%
Italian newspaper Il Tempo has published a shock report, claiming that the country's Institute has reduced the official figure for the number of people who have died from COVID from 130,000 to under 4,000. This may surprise many people who bought into the "killer virus" narrative and unleashed torrents of pure hatred on those of us who declined vaccination, having studied the figure for reported "COVID related deaths," and the methodology used to arrive at that figure ... Continue reading >>>

A newly published study from researchers in Sweden reveals that the immunity to COVID gained from vaccination, is dissipated by natural biological processes within months. Immunity, although it would be more honestly called temporary respite, from Wuhan coronavirus (Covid-19) injections is short term at best, and completely gone within months, this confirming the doubts raised by vaccine sceptics (or Conspiracy Theorists as mainstream media likes to call us Continue reading >>>

Covid 19: Statistics, Lies and the Corruption Of Science.As the COVID — 19 pandemic continues to dominate the news and defy the efforts of researchers to understand its many mysteries, including its origins and why it affects people who contract the virus in wildly different ways, one thing we have learned for certain so far is the extent to which the Pharmaceuticals manufacturers cartel (colloquially Big Pharma,) exercise a pernicious influence over medical research and healthcare.

COVID19 PCR Tests are Scientifically MeaninglessPoliticians and “experts” scream and shout about testing and isolation being the way to halt the COVID 19 pandemic to a halt, but everything else they hsve told us about the disease has been absolute bollocks, why should this be any different? Well surprise, surprise, it isn’t any different. The idea that testing everybody ten times a day (OK I might be exaggerating for effect,) will do any good is just another diversionary tactic ...

Critics Batter The Fake Science Used To Justify The Lockdown As Boris Waffles
Regular readers may recall this blog was among the first to expose the fact that the pandemic model predicting 500,000 COVID – 19 deaths if the entire nation was not placed under indefinite house arrest was based on a deeply flawed mathematical model of the pandemic built by a “scientist” at Imperial College, London, a college heavily reliant on funding from the Bill and Melinda Gates foundation. You may also recall we have reported on the determination of psychopathic megalomaniac Gates to insert himself into this phoney crisis